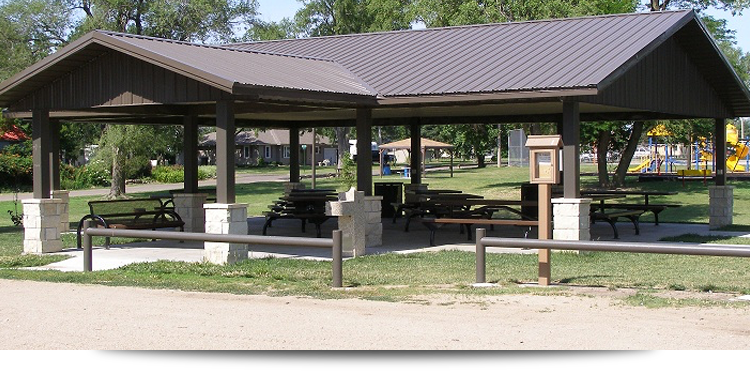 The City of Belleville strives to serve the public by providing quality recreation opportunities through the establishment and maintenance of the parks and grounds system.  The Belleville Street Department is responsible for maintaining both the City Park and the Rocky Pond Recreation Area.

There are no open fires allowed at either the City Park or Rocky Pond.

Originally used as a water supply for steam engines on the Rock Island Railroad, Rocky Pond was later deeded to the City of Belleville for recreational use.  Rocky Pond and the surrounding land covers 48 acres. The citizens of Belleville have been using the pond for years as a means for fishing, boating and other leisure.

Over the past five years, Rocky Pond has been stocked with blue gill, channel cat and bass.  In the past, Rock Pond has been stocked with trout through grant funds from the Kansas Department of Wildlife and Parks.  Since Rocky Pond is stocked by the State of Kansas, a fishing license is required and normal fishing laws apply.  If fishing for trout, a trout stamp must also be obtained.

The City has a total of 15 RV spots available at Rocky Pond.  RV hookups are available at Rocky Pond for $20 per night, $125 per week or $500 per month.  Water, electric and sewer connections are accessible at each spot.  Only 50 amp hookups are available.   A sewer dump is located by the Rest Rooms.  Camping in tents and use of the shelters and picnic areas are free, on a first come first serve basis. No reservations are taken for camping spots.  For more information, contact the City Office.

Canoes, row boats and other small water craft are allowed on Rocky Pond, but no gas engines, only electric.

High amounts of rainfall in 2003 caused extensive damage to the dam at the south end of Rocky Pond.  The bridge which is used to haul rail cars to the Hansen-Mueller Grain Elevator, was also in disrepair from years of use.  By 2006, the dam was failing, and would either need to be replaced or removed, and the Pond would have to be drained.  Through the combined effort of the Mid States Port Authority, the State of Kansas, and the City of Belleville, a new dam, spillway and track bed was built, essentially saving Rocky Pond.

The City of Belleville also received a $38,200 grant in 2007 from the Kansas Department of Wildlife and Parks for dredging of Rocky Pond.  Estimates of the depth of silt in the pond are around 17 feet.  Dredging was preformed around the perimeter of the pond, increasing the water levels from 6-8 feet to 10 feet.

With the help of Kansas Department of Wildlife funds, a new boat dock was installed in 2010.  This boat dock can be used to tie your boat up during a day of fishing, or just sit back and enjoy the sights and sounds of the area.

The Belleville City Park is located in the northern part of the City.  The Art Deco Band Shell located at the park was originally constructed through the WPA program in the 1930’s.  Other facilities at the City Park include baseball and T-ball diamonds, tennis courts, playground equipment, soccer field, basketball courts, restrooms and shelter houses.  New Rest Rooms with shower amenities and a new Shelter House were constructed in 2010.  New seating is being added in front of the Band Shell, making it more practical for public events.

With the addition of the new pool a few years ago, the City finished construction of a new, tile lined basketball court on the west side of the park.  With the lighting just finished, this is a great new addition to our park.

Both the Main Shelter House and the Band Shell can be reserved on a first come, first serve basis.  Contact the City Office at 785.527.2288 for reservations.

MINUTES/AGENDAS
Access the city of belleville's meeting mintues and agendas